Invasive species has been spotted in the Tetbury area of Gloucestershire, with attempts under way to locate nests

The Asian hornet’s long-feared arrival on the UK mainland has been confirmed, government scientists have said, with ecologists warning of dire consequences for honeybees if the species is not swiftly eliminated.

The hornets eat honeybees and have become widespread in central and southern France, prompting warnings in recent years that they could arrive in the UK via potted plants from France.

While not considered a threat to humans, the arrival of the hornets add to the woes of Britain’s honeybees, which are vital for pollination of many crops but have been suffering declines for decades.

The Department for Environment, Food and Rural Affairs (Defra) said on Tuesday that it had a confirmed sighting of an Asian hornet (Vespa velutina) in the Tetbury area of Gloucestershire. Officials said efforts were already under way to destroy the invasive species, using cameras and traps to locate nests before attempting to kill them off with pesticides.

Nicola Spence, Defra’s deputy director for plant and bee health, said: “We have been anticipating the arrival of the Asian hornet for some years and have a well-established protocol in place to eradicate them and control any potential spread.

“It is important to remember they pose no greater risk to human health than a bee, though we recognise the damage they can cause to honeybee colonies. That’s why we are taking swift and robust action to identify and destroy any nests.”

Matt Shardlow, the chief executive of the charity Buglife, said: “It’s really bad news. The ecological impact is that it potentially affects our ability to feed ourselves in the future.

“In terms of threats to people, as long as it doesn’t reach ridiculous levels of abundance, which it will struggle to do because there is not enough prey here for it, then it shouldn’t really add risk in terms of number of people who die from wasp stings.”

The hornets were first found in Jersey and Alderney over the summer, with beekeepers hoping they would be unable to cross the channel. But the confirmation that they have reached the mainland will put beekeepers on alert.

A spokeswoman for the British Beekeepers Association (BBKA) said: “They will be a real threat to our ability to keep our colonies going. The first sighting is an important event for us, because we’ll have to start making traps. 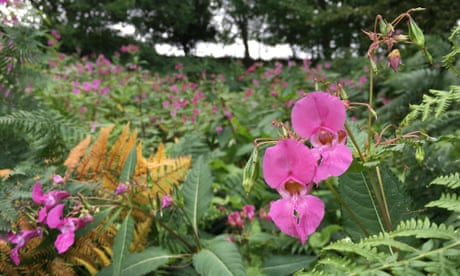 Invasion of the monster plants

“Asian hornets have a horrible habit of hanging around a hive entrance and then as soon as a bee comes out, they’ll bite their head off. A number of them will do that until all the bees are dead, and then go in and take their honey.”

Tim Lovett, director of public affairs at the BBKA, said the sighting was “not good news for honeybees”, adding: “What happens next in terms of containment measures will be vital and we look to Defra to implement the contingency plans to deal with this invasion of a non-native species.”

Defra’s science wing, Fera, says that the primary effect of the hornet’s predation is the death of adult worker honeybees, warning that “just a handful of hornets can destroy an entire … nest in a couple of hours”. While certain honeybees have defence strategies to reduce damage, including forming a mass of bees around the hornet, raising the temperature to a lethal 45C, Fera says the European honeybee is less effective at this “heat-balling”.

In terms of the risk to humans, Shardlow said: “This is a fairly big wasp. Generally the bigger they are, the less aggressive they are. There are no bigger threat to humans than the wasps we already have.”

One live hornet and one dead one were spotted by government experts but as yet no nests. The National Bee Unit in North Yorkshire is conducting DNA tests on the dead hornet in an attempt to discover how it arrived in the UK. Government experts believe the species will be unable to survive the colder winters in the north of the UK.